The culmination of this 10-year painting series will be held on Sunday, September 15th, 2019 at noon when the Air Force painting, the last of five paintings will be officially installed. The unveiling and installation coincide with Camp Ripley’s biennial Open House and Community Appreciation Day, which is open to the public. There will be much more to come about this exciting event, but plan now to attend.

For the past five years, as part of the U.S.-Norwegian Reciprocal Troop Exchange (NOREX) which takes place at Camp Ripley in Little Falls, artist Charles Kapsner has had the distinct honor of hosting the senior officer from the Norwegian Home Guard at his studio. This year’s NOREX is scheduled for February 15-17, and again, Kapsner will create a portrait drawing of this year’s lead officer, Navy Captain Jon Ivar Kjellin. ​

As has become tradition during the Exchange at Camp Ripley, the senior officer sits for an official drawing. Portrait drawings have been completed for the following senior officers:

The principal tasks of the Norwegian Home Guard are to safeguard territorial integrity, protect important infrastructure, support national crisis management, strengthen the military presence and provide support to civil society. The Home Guard is divided into 4 regions, 11 districts and more than 200 areas covering all of Norway.

Below are images of each visit: 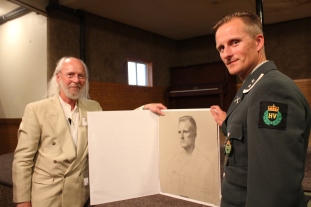 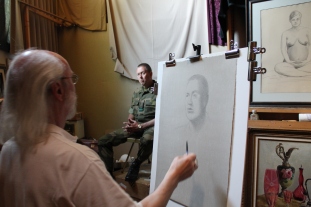 In the studio with Lieutenant Colonel Per Olav Vaagland

Portrait sketch at the studio with Lieutenant Colonel Ingvar Seland 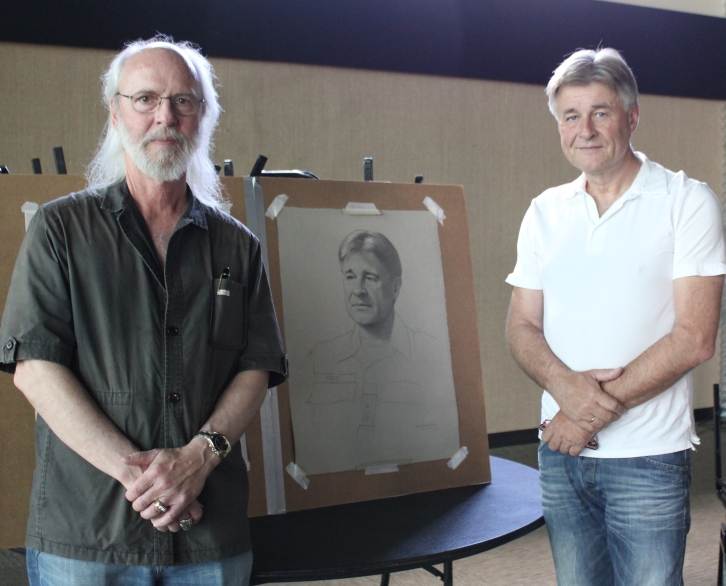 Kapsner and Colonel Rolf Wold with the final drawing

Marine Corps painting to be unveiled on May 26th, 2:30 PM

Little Falls, MN — On Saturday, May 26th at 2:30 PM, the public dedication and unveiling of the Marine Corps painting, the fourth of five 8 X 10 ft paintings comprising the Veterans Historic Art Monument, installed at the Committal Hall at the Minnesota State Veterans Cemetery north of Little Falls, MN. This painting joins three previously completed ones, Army (2011), Navy (2014) and Coast Guard (2016); each depicts the history of, and contributions by our nation’s military men and women. All are painted by Minnesota artist Charles Gilbert Kapsner.
Regional in location, but national in scope, each painting uniquely captures the spirit of each branch of service, vividly portraying the stories, faces, and sacrifices of our Nation’s servicemen and women. Veterans and active duty military serve as models, and this painting also includes a small portion of soil brought back from Mt. Suribachi, where the iconic Raising the Flag photo on Iwo Jima was taken. The artist used the small portion of soil to grind in with paint as part of the depiction of the 1945 Marine Corps flag-raising.
The dedication and ceremony program includes Veterans and active duty personnel, some of whom served as models in the painting, dignitaries, Marine Corps re-enactors, and the artist. Refreshments will follow the formal program which includes:
Brigadier General Lowell Kruse, Camp Ripley
David P. Swantek, Senior Administrator of Memorial Affairs (MDVA)
Erik B. Sogge, Cemetery Administrator (MDVA)
Veterans and active duty personnel depicted in painting: Roy T. Edwards Col. USMC (Ret.); Holly Zabinski, Major USMC; Cory Engen, Sgt. USMC (Ret.); Quintin Sam, Sgt. USMC (Ret.)
Charles Gilbert Kapsner, Artist
Greg Zylka, Mayor of Little Falls
Military Honor Guard: Valhalla Detachment, Marine Corps League, St. Cloud

Marine Corps Painting on Temporary Display at The Depot in Duluth

Painting on Display at Duluth Depot

Marine Corps Painting on Temporary Display at The Depot

DULUTH, MN. – Veterans Memorial Hall, a program of the St. Louis County Historical Society, will unveil Minnesota artist Charles Kapsner’s Marine Corps tribute painting at the Duluth Depot. The temporary exhibition is an 8 foot by 10 foot oil painting and will include appearances by the artist. The painting will be displayed from May 17 to May 22, and Kapsner will be just outside Veterans Memorial Hall from 9am to 5pm.

This is the fourth in a series of five paintings honoring the women and men of each military branch. Regional in location, but national in scope, the paintings uniquely portray the stories, faces, and sacrifices of our nation’s servicewomen and men. Kapsner’s paintings are larger than life and well received by the families of military service veterans. Veterans and active duty military serve as models for the painting which includes soil from Mt. Suribachi which Kapsner ground into the paint as part of the depiction of the Marine flag-raising in 1945.

The artist previously created tribute paintings for the Army, Navy and Coast Guard. The last painting will pay tribute to the Air Force. All the paintings will be on permanent display in Committal Hall, Minnesota State Veterans Cemetery in Little Falls.

Each summer, Charles hosts guests from the Norwegian Exchange (NOREX) which takes place at Camp Ripley in Little Falls. As has  become tradition, the senior officer sits for an official drawing. This year, Ltd. Colonel Per Olav Vaagland joined Kapsner at his studio and enjoyed a great visit. In years’ past, Lt. Col. Ingvar Seland (2015) and Colonel Rolf  Wold (2014) had their portraits done. As part of the visit, gifts are exchanged, and each Colonel receives his portrait sketch.

Lt Col. Per Olav Vaagland during his session

In the studio with Lieutenant Colonel Per Olav Vaagland

A perfect day awaited those who attended. Erik Sogge, Cemetery Administrator provided a welcome. Bill Osberg, U.S. Navy Veteran and member of the Mn. State Veterans Cemetery Memorial Association, served as the Master of Ceremonies, taking over from Jack Peck who served in the role for many years. Joseph Schirmers provided the invocation, and lovely music was provided by the Richfield Symphonic Band and the St. Francis Community Chorale. The memorial address was provided by Colonel Scott St. Sauver, Post Commander, Camp Ripley. The day truly honored the men and women of all branches of the military. Afterwards, everyone was invited to the Committal Hall to view the three completed paintings, with many taking part, asking questions, and pondering the paintings.

Momentum has built, as has interest. Here are several videos that capture the initial ideas, things along the way, and recent unveilings.

Military Mural to have exclusive viewing in Duluth

Coast Guard painting installed. On February 6th, 2016, the Coast Guard painting was permanently installed at the Committal Hall. There was a formal program and a reception at the Little Falls American Legion. The project will be 3/5 of the way completed–with huge thanks to ALL who continue to believe in, and see the impact of this project! This is the finished painting and a story from the 1/29/16 Brainerd Dispatch . 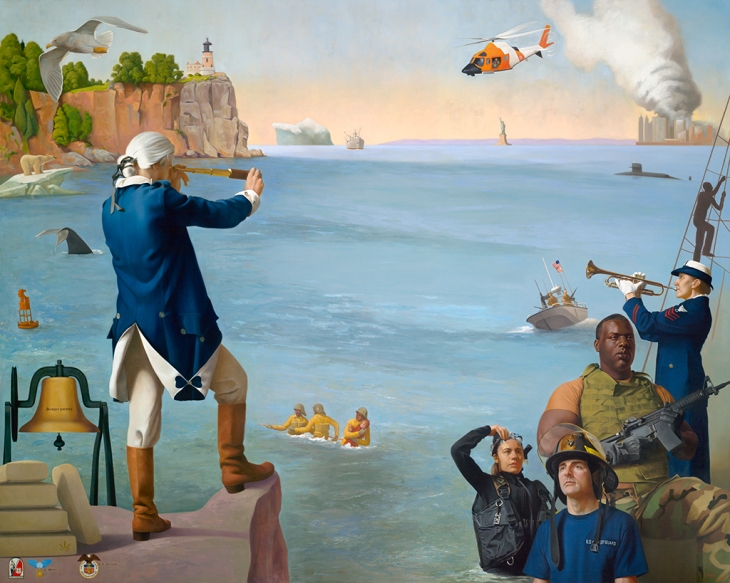 Painting on the move! On Memorial Day, the Coast Guard painting was on display for everyone to get a sense of its progress. As you can see, it’s very hands on–with Cemetery Director David Swantek and his crew an integral part of the painting’s safe passage. Thanks to Falls Furniture for loaning us the truck to get the painting back and forth.

Carefully into the Hall

Back into the moving van (thanks to Falls Furniture)

Almost back to the studio

Norwegian Exchange: Each summer, Charles hosts guests from the Norwegian Exchange (NOREX) which takes place at Camp Ripley in Little Falls. As part of the exchange, senior officers, including Lt. Col. Ingvar Seland (2015) and Colonel Rolf  Wold (2014) visited Kapsner’s studio. As part of the visit, gifts were exchanged, and each Colonel receives a portrait sketch, as done by Charles, which includes a “live” sitting. 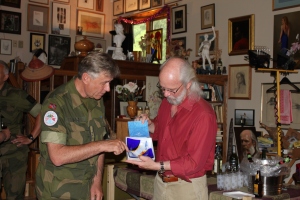 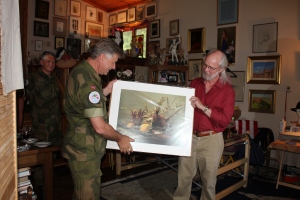 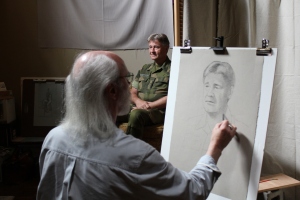 Colonel Wold models for his portrait 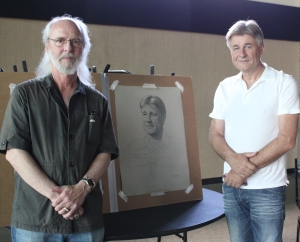 Kapsner and Colonel Rolf Wold with the final drawing